How to Get Rid of Dandelions

Are you wondering how to get rid of dandelions in your lawn? There are countless websites and articles on the Internet that tell you how to kill dandelions. The problem is, many of the techniques they suggest are not terribly effective or can take quite a bit of time to actually kill dandelions.

On this website we will go over 5 ways to kill dandelions, and rate them for effectiveness. Let’s begin! (Spoiler: we rate Method #5 as the most effective dandelion method.) 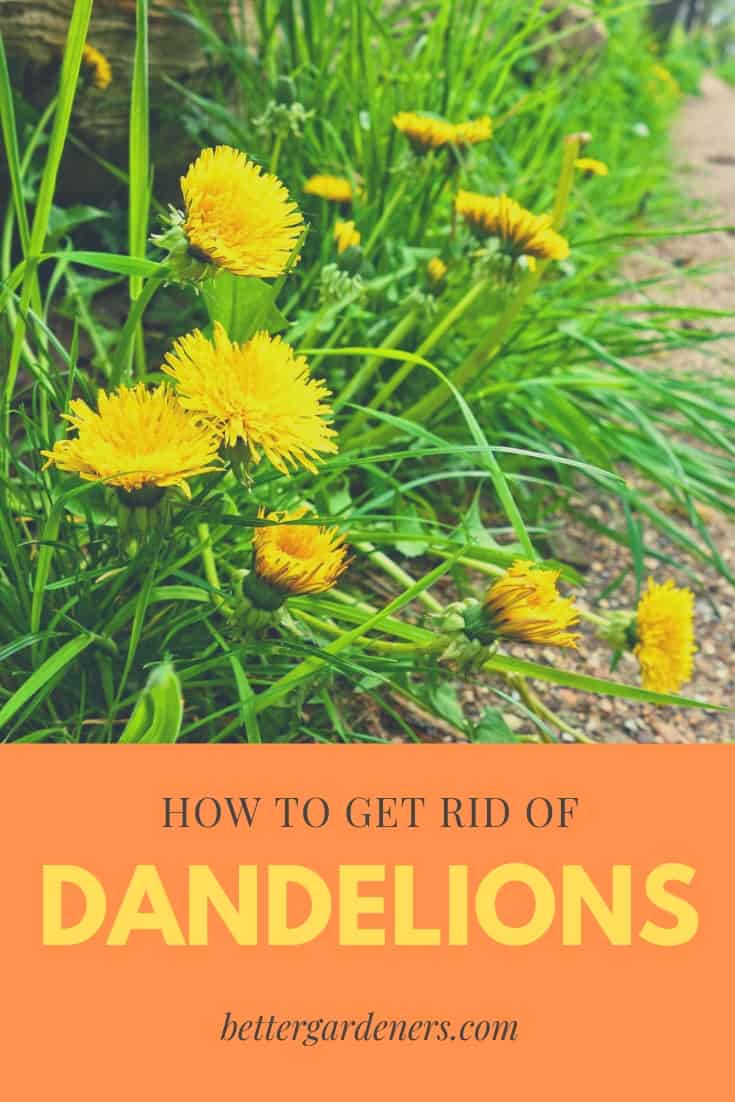 How it works: If you’re looking for a natural dandelion killer, boiling water scalds dandelions and can do the trick. Heat up water in a kettle or pot, then carefully and slowly pour it on to the dandelion plant. Be careful though because you could easily either A) kill other plants like your lawn or B) burn yourself either on the hot pot or with the water itself.

Effectiveness: In our experience, killing dandelions with boiling hot water isn’t the most effective, although it is a homemade dandelion killer. It may kill the weed within a few days but it takes a fair amount of water and can kill patches of your lawn too. And who wants patches of dead lawn where dandelions used to be? Is that really an improvement over the dandelions to begin with? Besides, unless you yank up the dandelion up and pour the water directly on the dandelion’s root system, there’s a very good chance the dandelion could grow back even after its current head dies. Keep reading for more effective methods of dandelion control.

How it works: Another way to get rid of dandelions naturally is by pouring vinegar on the plants themselves. Vinegar is extremely acidic and can kill any plant or weed exposed to it. Normal household vinegar is generally not quite acidic enough to do a good job but special horticultural vinegar is more effective because it is two to four times more acidic than the normal stuff in your cupboard. Pour the vinegar on your dandelions and with a few repeated treatments, it can kill the green bits– again temporarily.

Effectiveness: Like the boiling water technique, using horticultural vinegar isn’t the most effective dandelion killer. The dandelion’s taproots, which can extend up to ten inches in length below the surface won’t be damaged by pouring vinegar on the green part above the surface so unless you manually pull the dandelion as best you can, it may grow back later. On the bright side, using horticultural vinegar as a natural dandelion killer won’t hurt you even if you spill some on yourself (which can’t be said for boiling water). Read on for ways to kill dandelions.

Want to try this method? Try getting some horticultural strength vinegar:

How it works: Dandelions are broadleaf weeds, which means broadleaf herbicides can kill them without damaging your lawn (grass is not broadleaf). Simply spray dandelions with a broadleaf herbicide and you’ll probably see results the next day. It’s especially effective at killing dandelion weeds that creep up in cracks in cement or paths, but it can work for spot treatment in the middle of your lawn too (without killing your grass).

Effectiveness: Dandelion spray is a fairly effective way of getting rid of dandelions, and it also works on other broadleaf plants like crabgrass (read about crabgrass on Wikipedia). So, is spraying with herbicide the best way to kill dandelions? Well, it certainly works. But plenty of people have reservations about using chemicals on their lawn, whether it’s because they don’t want to harm their pets, children or themselves. If that’s a concern for you, read on for other more natural dandelion killers.

How it works: Using a dandelion tool is a great way to kill dandelions without killing the grass. You simply dig out the roots with a dandelion picker tool.

Effectiveness: Pulling dandelions, taproot and all, is the number one most effective way to kill them and make sure they don’t come back in a few months or next year. Of course there are still downsides to manually pulling these weeds: it means you need to kneel down on the grass and pull them out yourself, which can be a pain in the butt. (Of course you can get outdoor kneepads, garden knee mats and gloves which make this less unpleasant.) Read on for one final really good way to kill dandelions.

How it works: Stand up weeders are a relatively new phenomenon and they allow you to yank dandelions up by the roots without having to bend down. They work by relying on claws that dig into the soil and grasp the plant by its taproot, letting you firmly grasp it to pull it out.

Effectiveness: Overall we would rate the dandelion extractor as the best way to get rid of dandelion weeds. Why? The dandelion tool rips out the entire dandelion weed from its roots, which can be up to 10 inches in length, to prevent them from growing back. It also doesn’t hurt your back or knees because you won’t have to bend down until it’s time to collect the dead dandelions afterward. And finally, dandelion extractors don’t rely on potentially harmful or dangerous chemicals that can be bad for you, your kids, pets, or your lawn. We would rank using a stand-up dandelion picker tool the overall best way to kill dandelions.

Frequently asked questions about getting rid of dandelions

Is the dandelion a weed or a flower?

You saw tomato, I say to-mah-to. It depends on your point of view but most people view dandelions as a weed that can be an eyesore in the middle of your otherwise pristine lawn. Although dandelions do sport yellow flowers when they’re growing, at the end of their lifecycle they transition to round seed heads called blowballs which will help them spread to the rest of your lawn. So, are dandelions weeds? We’d say that they are. This website is meant to teach you how to get rid of dandelions.

How to get rid of dandelions?

What kills dandelions but not grass?

Using a broadleaf herbicide can kill dandelions without killing your grass. The same is true for dandelion picker tools which help you uproot dandelions manually.

When do dandelions bloom?

Dandelions flourish in the spring and fall when the weather is warm enough and the days offer less than 12 hours of sunlight. In some colder regions, they may grow throughout summer as well. In warmer climates, dandelions may grow best in winter time.

How long do dandelions last?

The video above was filmed over the course of one month. By the time you notice a dandelion growing with its yellow flower, it may have a week or two until it goes to seed, replacing its flower with a round sphere of seedlings which will then blow away in the wind and create more dandelions in your lawn.

How do dandelions spread?

At the end of their lifecycles dandelion flowers turn into seed spheres called blowballs which blow away in the wind. A single dandelion can sprout almost two hundred seedlings which can create more dandelions nearby once they scatter. Dandelion seeds are more lightweight than most seedlings so they can travel quite far distances if it’s windy. Some sources even say dandelions can spread a mile or more on a particularly windy day.

Raw dandelions are edible for humans: dandelions are safe to eat. In fact, their leaves contain quite a bit of vitamin A, vitamin C, and calcium. You can eat them in salads or sauté them in oil to eat them cooked (they maintain their vitamins either way). If you’re interested in trying to eat dandelions, make sure you wash the leaves and flowers thoroughly before you consume them. Read more about the edibility of dandelions on SFGate.com.

Are dandelions bad for dogs?

Dandelions are not bad for dogs. In fact they’re not even bad for humans! The dandelion plant is entirely edible, even though it might not look like it if you’re used to thinking of dandelions as weeds. They may actually function as a digestive aid for some dogs.

How to prevent dandelions?

The best way to prevent dandelions is by pulling them up by the roots, making sure the entire taproot is yanked up from the ground so it doesn’t grow back. It’s also important to pull dandelions up before they go to seed and spread more. It is especially important to make sure all of the dandelions in your lawn have been killed in fall because if you don’t get rid of them, they’ll grow back next spring (unfortunately dandelions are perennial).

Where do dandelions come from?

Dandelions come from seeds blown in the wind. A single dandelion seed can travel quite a distance in the wind, with some sources even suggesting they can travel a mile or more. If your neighbor has a ton of dandelions in their yard that are going to seed it’s quite possible they may blow into your yard and start growing in your lawn. It’s best to get rid of dandelions as soon as they sprout up. The best time to get rid of dandelions is when they have yellow flowers, before their flowers have a chance to turn into seed heads which can easily blow away in the wind, or fall apart and disperse you’re trying to pull them.

Where do dandelions grow?

Dandelions, known by the scientific name Taraxacum, are native to Eurasia and North America. There are several different types of dandelions, and some plants that look like dandelions are actually false dandelions. Most often these turn out to be Hypochaeris radicata or catsear (also known as flatweed). These are dandelion looking plants that get quite a bit taller than a normal dandelion does, growing almost 8 inches or 20cm tall. Read more about false dandelions on Wikipedia.

How do you spell dandelion?

The official correct spelling is dandelion although it’s commonly misspelled as dandellion and dandylion.

This website may use affiliate links for commissions on purchases you make. You will not be charged extra by purchasing through these links.